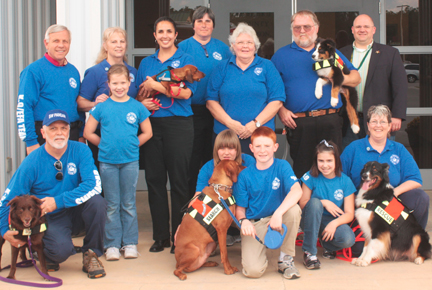 Dogs to assist in a variety of community efforts

The Walton County Sheriff’s Office (WCSO) showcased the newest addition to the Department, the WCSO Volunteer K-9 Posse.  The volunteer team work as a group known as SW PANSAR (Southwest Panhandle Search and Rescue).  The group has worked with various agencies throughout the Southeastern United States.  The group has worked on the Caylee Anthony case, helped search for victims during the Tuscaloosa tornadoes, and closer to home, the Colin Hale case from 2009.  Hale was an elderly gentleman that wondered away from his home in Sandestin and was located in a block of woods not far from his home.  All of the assistance that SW PANSAR has given has been at no cost and members say that they rely on 100% donations.

The K-9’s are trained to pick up on live and deceased human scent and are able to cover ground that is not easily accessible to humans.  Not only do these specialized K-9’s cover land, but water as well.  As a matter of fact, they recently assisted in locating the missing Coast Guard officers who crashed into Mobile Bay.

In addition to search and rescue, several of the dogs are trained in emotional first aid (EFA).  According to SW PANSAR, emotional first aid “refers to the act of assisting a person who is emotionally distressed following a trauma or crisis.”  The team also offers an educational program directed at children who might become lost.  Team members are highly trained individuals who have come together for different reasons but for the same great cause.

One of the team members, Sharon Gavin, is currently in talks with Laurie Hood, founder of Alaqua Animal Refuge and Sheriff Michael Adkinson in putting together an innovative program in which service dogs will be used as a part of therapy with victims of childhood abuse.

SW PANSAR also has a Junior Cadets team, which consists of Ashley and Emily Coyne, and Arianna and Bryan Pitts.

home and gardenwalton county
The future of farming with aquaponics lecture Apr. 4
Adrenaline Telluride MountainFilm On Tour at WaterColor April 11-12