Violence against dolphins in the Northern Gulf continues 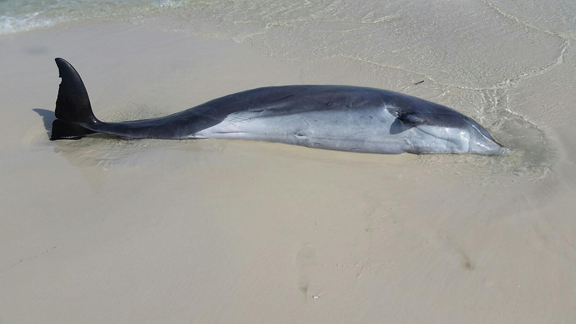 NOAA’s Office of Law Enforcement in Niceville, Fla., is investigating a case involving a dolphin found late Monday afternoon with a bullet lodged in its shoulder.  The animal was recovered by the marine mammal stranding team of the Emerald Coast Wildlife Refuge off Okaloosa Island just west of the Destin bridge.

Final necropsy, or non-human autopsy, results are pending. The dolphin was an older male, nearly 9 feet long, weighing between 500-550 lbs. During the necropsy a veterinarian found a bullet in the dolphin’s shoulder, just behind the back of the head.

NOAA officials seek information from anyone who may have details of this incident. Please call the NOAA Enforcement Hotline as soon as possible at 1-800-853-1964. Tips may be left anonymously.

The number of violent incidents towards dolphins in the Northern Gulf appear to be increasing. Since 2002, at least 18 dolphins have stranded with gunshot wounds, with 12 of those occurring since 2010.

NOAA is also asking for the public’s help in preventing future harm to dolphins by not feeding or attempting to feed them. Dolphins that are fed by people learn to associate people with food and put themselves in dangerous situations when they approach people, boats, and fishing gear looking for food. Dolphins will even remove bait and catch directly from fishing gear and teach these behaviors to their young. These behaviors have resulted in an ncrease in human violence towards dolphins, including retaliation by fishermen frustrated by dolphins taking their bait and catch.

Harassing, harming, killing or feeding wild dolphins is prohibited under the Marine Mammal Protection Act of 1972. Violations can be prosecuted either civilly or criminally and are punishable by up to $100,000 in fines and up to  one year in jail per violation.

NOAA’s mission is to understand and predict changes in the Earth’s environment, from the depths of the ocean to the surface of the sun, and to conserve and manage our coastal and marine resources.