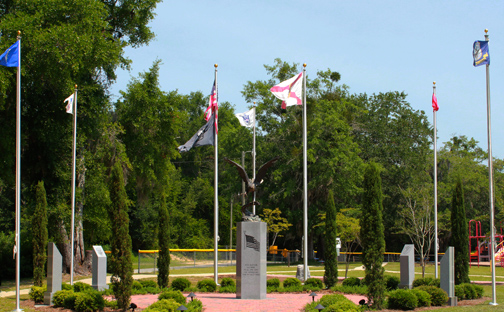 Freeport celebrates veterans with ceremony and benefit jam Nov. 10 and 11

Veterans ceremony: The City of Freeport is hosting their 8th annual Veterans Day ceremony on Friday, Nov. 10 at 2 p.m. The event will include the unveiling and dedication of the new Purple Heart Memorial.

The ceremony will be held at Freeport Veterans Memorial at Casey Park, 112 SR 20 adjacent to City Hall.

Veterans Jam: A concert to benefit the Freeport Veterans Memorial will be held at 7 p.m. on Nov. 11 at the Gazebo Green at Hammock Bay. Performers include Amy Blizzard, Nathan and Brittany Worthey, Artie Rodriguez, Ashton Evans, Courtney McCormick, and Danny McNeil, along with a performance by the Sophistocats. The Freeport Memorial committee is hosting the benefit.

The event is free with donations encouraged.

Join Topsail Hill Preserve State Park in “Honoring Veterans: Past, Present and Future” on November 11 from 8:30 am to Noon.  The park will be celebrating Veterans Day with programs, exhibits and activities honoring the connection between the park, the Florida panhandle and the local military history.  The festivities will kick off with an opening flag ceremony, vintage airplane flyover and Breakfast with a Ranger sponsored in part by the Friends of Topsail Hill Preserve State Park, Hardee’s and Starbucks.  There will also be a Civil War living history exhibit on site as well as a Kids Korner with fun activities.  Coffeen Nature Preserve will be presenting its “Bombs Away” program.  A closing flag ceremony and mini parade through the campground of golf carts, bikes, strollers, pets and you will end the festivities. Sign up for tours at Coffeen Nature Preserve after the event will also be available. Admission is free during the event.

The City of DeFuniak Springs invites you to the 12th Annual Veterans Day Program to be held on November 11 at 11 a.m. at the lakeyard amphitheater on Circle Drive.

A tribute to veterans at Point Washington UMC Nov. 12

A Tribute to veterans is being sponsored by Point Washington UMC (Santa Rosa Beach) on November 12 at 3:00 p.m. The church will offer a unique presentation of patriotic music before the play, My Father’s War. Special ways to recognize and appreciate veterans is also planned by each of the area churches.

My Father’s War, A Story of War, Survival and Grace is written, directed and performed by Carol Ponder and Robert Kiefer. It is based on the memoir, “Ponder Anew” that was written by Carol’s father, Lt. Hershel Ponder.

My Father’s War is the story of Carol’s father who enlisted in the Army Air Corps right after Pearl Harbor and fought in WWII.