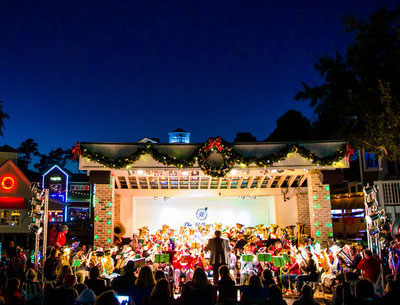 The Village of Baytowne Wharf in Sandestin Resort will be hosting an evening of holiday entertainment on Saturday, Dec. 10.

Playground Music Center presents a Tuba Christmas where more than 30 brass instruments play some of your favorite holiday classics starting at 5 p.m.

Then Baytowne will host two ice skating shows with figure skating pair Jennifer Don and Ryan Berning. It will be a fun night for the whole family.

Jennifer Don is a National, International and World Junior Medalist in singles and pairs, U.S. National Collegiate Champion in singles, and National Champion of Taiwan in singles. She also holds a place in skating trivia for the first woman to ever win a competition under the new IJS judging system in Oberstdorf, Germany. At one point she was the only one who qualified to compete internationally in singles and pairs on the Junior Grand Prix Series. She was the head choreographer for the Four Continents Championships closing ceremony in Taiwan, working with olympians such as Meryl Davis, Charlie White, Mao Asada, Mirai Nagasu, and Daisuke Takahashi. Don also has a BA from UCLA.

Ryan Berning has been skating professionally for 7 years working for companies including Holiday on Ice, AEG entertainment, and Royal Caribbean cruise lines. While working for Royal Caribbean he had the opportunity to skate aboard three different ships: The Voyager of the Seas, Oasis of the Seas, and Allure of the Seas. He is the former 3 time national skater and 3 time Junior National competitor for the United States. He was the Midwestern Sectional Champion in Junior pairs.

The evening finish off with a fireworks display at the Lagoon at 8 p.m.