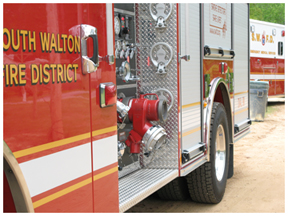 SANTA ROSA BEACH – It was a busy weekend for the South Walton Fire District (SWFD) with back to back brush fires, starting on the eve of Wildfire Awareness Week.  Florida Agriculture and Consumer Services Commissioner, Charles H. Bronson, announced on Sunday, that April 11-17 is Wildfire Awareness Week. On Saturday, April 10, 2010 at 2:41p.m., the SWFD received a call for a large outside fire threatening structures. The SWFD arrived quickly and found a densely wooded area at the end of Nuit Lane in Santa Rosa Beach on fire and growing rapidly, driven by the strong easterly wind. The SWFD had all units committed to the fire and were able to control the fire in approximately 2 hours with the assistance of Freeport FD and three Division of Forestry (DOF) tractors.

On Sunday, April 11, 2010 at 12:12 p.m., the previous days’ fire escaped its fire break, jumped DOF fire lines and rapidly grew in intensity heading towards homes on Cypress Point Lane. Once again with the full commitment of the SWFD, assisted by the DOF, the homes were protected and the fire controlled.
The initial fire was determined to be caused by a resident burning yard debris. The SWFD is urging residents to please use extra caution when burning yard debris. According to Commissioner Bronson, “Almost 80 percent of wildfires in Florida are caused by human carelessness, with arson and escaped debris burning, being the top two causes.” A result of our cold harsh winter, the fuels in the woodlands have dried and cured.  This, coupled with our current weather pattern, will cause fires to rapidly develop and burn with extreme intensity.
·         Contain your fire in an 8-foot-diameter pile or non-combustible barrel that is at least 25 feet from forests, 25 feet from your house, 50 feet from a paved public road, and 150 feet from other occupied buildings.
·         Don’t burn on windy days or when the humidity is below 30 percent.
·         Never leave a fire unattended, and make sure it is out before you leave.
·         Keep a shovel and water hose handy.
Since January 1, 2010, Florida has experienced 852 wildfires that burned 13,407 acres. Most of these fires were caused by human carelessness.

For more information on fire prevention tips and burning rules and regulations you may contact the South Walton Fire District Headquarters at 850-267-1298 or visit our website at www.swfd.org.