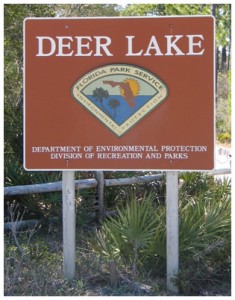 I have received several emails and phone calls expressing concern about the potential closure of Deer Lake State Park. I have spoken with both local park officials and the state about the proposal. At the end of this email is a public memo provided by the Florida Department of Environmental Protection. (FDEP)

Here is a synopsis of what I have been told or found through research. As we all already know, the state is experiencing a financial crunch and must cut expenses.  In an effort to cut expenses yet retain employees, 19 parks are being proposed for a temporary closure. Eight of the 19 parks slated for closure are in the Florida Panhandle. Here is a geographic breakdown of the proposed closures using the FDEP park region designations:

According to state officials, Deer Lake is being proposed for closure on the basis that (1) it receives a small amount of  use relative to the expenses of operating it and (2) it generates no revenue. This rationale is disturbing.  One problem  is that there is no documentation by which to ascertain how much the park is in fact being used. Deer Lake State Park does not have a visitation kiosk in which users can register. In the other parks, (Topsail, Grayton, Eden, etc) there is a day fee with a registration form. In essence, as was acknowledged by the state, there are no actual records which quantify public use of this park. It is being estimated and assumed it is not well used.

The other parks in the area  charge a day fee  which helps defray some of the operating expenses. While there is some discussion of assessing a day fee to help with Deer Lake in the future,  according to the state officials I have spoken to, there does not appear to be any discussion of assessing a day fee as an alternative to closure. In  other parks, the day fee works off an “honor” box. No ranger is needed to collect the fee.

If in fact the operating expenses are so minimal, it would seem the imposition of a day fee and/or a fundraising drive could produce the funds to keep the park open. The closing of a gulf front park with its contribution to tourism and local year-round use should be a last resort if alternatives to help cover the operating costs are not possible. I would be interested in knowing whether our membership would be willing to pay a day fee (typically $2-3) to use the park. Please give me your thoughts.

The timing and procedure work like this:  FDEP must make a recommendation of closure to the Governor’s office. If the Governor approves the closures, the proposal must go to the state legislature. The legislative session is from February through May 1st. A decision must be made during that time frame. If the state legislature votes to adopt the FDEP proposal, the closing could take place the first of July with no fixed expiration. The park will be re-opened when it is deemed financially feasible.

Some fear has been expressed as to whether Deer Lake State Park may ultimately be sold to a private purchaser. The normal procedure for sale of a park would work like this: Title to the park  is held in trust. The Trustee is  the Board of Trustees of the Internal Improvement Trust Fund. The Florida Division of State Lands is the administering agency for the Trustees. Parks and Recreation (P & R) manages the parks.

The first step in selling a park would be for P & R to determine that the park serves no conservation or other public purpose and recommend it be designated as “surplus” land. Before it is considered for surplus, a notice is sent to other state agencies and the county to determine if any other entity would want the parcel. If no one responds affirmatively, the parcel is released to the Trustees and goes before the ARC (Acquisition and Restoration Council). That committee decides whether the park should be surplused. The public can speak at the ARC meeting. The notice of the meeting is on the FEDP website.

If the ARC  decides to surplus the park parcel, a notice for bids  must be given to property owners within 500’ and a notice will be given in the newspaper although the statute provides “(4)  Failure to provide the notice as set out in subsections (1) and (3) shall not invalidate the sale, exchange, lease, or easement.”

I cannot yet verify whether this is the procedure that would have to be used for Deer Lake State Park. Deer Lake is subject to an agreement between several agencies and St. Joe and I don’t know if the documents cover discontinuance of Deer Lake as a park.

The Division of Lands has assured me there is no intent to sell Deer Lake State Park. In addition to  providing a wonderful “old Florida” experience  for locals and visitors,  an important function of the park was to provide habitat for endangered species. Undoubtedly there would be a large public outcry if Deer Lake State park were offered for sale.

From the emails and phone calls I have received, I am aware that there are those who uses the park on a regular basis.  Public input should be directed to  the governor’s office and FDEP.

The Governor’s email address is: Charlie.Crist@MyFlorida.com  His mailing address is:

FDEP accepts only letters into the official records. Therefore, you must send a letter to:

The following from is the official announcement from FDEP:

During development of the Legislative Budget Requests for Fiscal Year
2009-2010 all state agencies were asked to submit plans to reduce their
annual operating budgets by up to 10 percent.  If approved by the Office of
the Governor, the reductions will be considered during the 2009 legislative
session.

Each division within the Florida Department of Environmental Protection has
submitted a 10% reduction in operating budget to be included in the
Department’s Legislative Budget Request for fiscal year 2009/2010; resulting
in an overall agency budget reduction of 10%.

The Division of Recreation and Parks has proposed temporarily closing public
access to 19 state parks.

* These parks were chosen based on low visitation numbers and revenue
compared to relatively high operating budgets.
* If closed, these parks will remain under the supervision of a
full-time caretaker.
*Where feasible, the Department will do everything in its power to
retain displaced staff in other agency positions.

*If faced with closure, current, full- time staff at the affected
state parks would have the option to be transferred to other parks.

*Funding for OPS staff (temporary and seasonal employees who do not
receive benefits) at the affected parks would be eliminated or reduced.

DEP’s state parks will continue providing high quality service to the public
while decreasing expenditure where possible. We fully intend to re-open the
19 parks potentially facing closure when the state’s economy improves.  While
this was a difficult decision, the proposal reflects our effort to reduce
expenditure while protecting the greatest number of staff members.