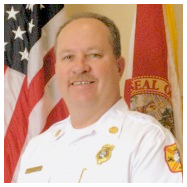 From the office of Senator  Don Gaetz

Chief Talbert received the state’s highest award for leadership in the firefighting service during ceremonies at Florida’s Capitol where Senator Don Gaetz joined other state officials in paying tribute to Talbert.

A career veteran of the fire service, Talbert was chosen by the firefighter community for his continuous commitment and dedication to serving and protecting area residents throughout the South Walton area.

“Chief Talbert has made all of Northwest Florida proud today,” Gaetz (R-Niceville) said.  “For 32 years he has devoted his life and his career to protecting the lives and property of the communities he has served.  His skill and commitment make him a model for all of Florida.  For those who know him and see his leadership in action, this award is certainly no surprise.  He is Florida’s best.”

As a third generation firefighter, Talbert began his career in 1978, joining the firefighting force in Marion County. Soon afterwards, he began working for the Kennedy Space Center Fire Rescue Department, where he assisted in developing and implementing space shuttle rescue procedures for twenty-six space shuttle missions. In 1995, Talbert accepted a position with the City of Titusville’s Fire and Emergency Services, where four years later, he was promoted to Fire Chief for the City of Titusville. After serving eight years, he joined the South Walton’s Fire District as Fire Chief and Administrator in 2007.