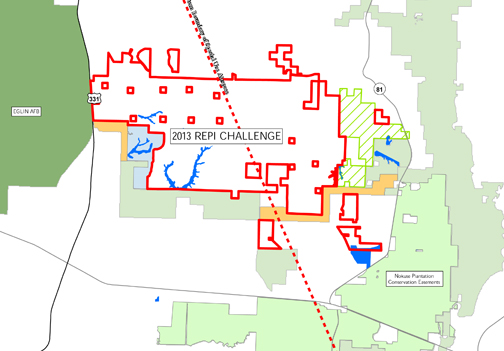 TALLAHASSEE –The Florida Department of Environmental Protection, the Trust for Public Land and landowner M.C. Davis are partnering to conserve 20,850 acres of critical habitat land east of Eglin Air Force Base after being awarded $1.75 million from the U.S. Department of Defense as part of the 2013 REPI Challenge.

The Department is slated to contribute $10.2 million of Florida Forever funds, Davis has discounted the property by $7 million, the U.S. Department of Defense will contribute $1.75 million as part of the 2013 REPI Challenge and Eglin Air Force Base will contribute $550,000. The purchase requires approval by the Board of Trustees of the Internal Improvement Trust Fund, which is tentatively scheduled for the Florida Cabinet meeting on Aug. 20. REPI_CHALLENGE map

Governor Scott said, “Florida is the country’s most military friendly state, and today’s announcement is great news for the environment and the U.S. military stationed in Florida. We must remain committed to giving our military the tools necessary to keep our country safe, while protecting Florida’s unique environment.”

“Being able to conserve nearly 21,000 acres around Eglin Air Force Base continues the state’s partnership with the U.S. military to buffer military installations and brings more critical habitat into state ownership to benefit the environment,” said DEP Secretary Herschel T. Vinyard, Jr. “This is a massive amount of land that will be conserved based on a great partnership between the Department, the Department of Defense, M.C. Davis and The Trust for Public Land.”

The Readiness and Environmental Protection Integration Program funds cost-sharing partnerships for the military with state and local governments and private conservation organizations to address the need for compatible land use and conserved natural landscapes in support of military readiness. Projects require at least a 1:1 funding match.

If approved by the Florida Cabinet and once closed, the Seven Runs Creek Florida Forever Project will be complete. In 2010, the North Nokuse Plantation project, which encompasses 11,961 acres, and the Seven Runs Creek project — 14,649 acres — were combined. The project was added to the Florida Forever priority list because of its groundwater recharge benefits and ability to protect 14 rare species, including the Florida black bear, gopher tortoise, Florida pine snake, Pine Barrens treefrog and eastern diamondback rattlesnake. It also provides additional buffer for Eglin Air Force Base, one of the country’s largest Air Force bases.

“The proposed Nokuse Plantation project is a great benefit to Eglin Air Force Base and the state of Florida. This easement is not possible without the strong financial and staff support of Eglin’s partners, the Florida Department of Environmental Protection and the Trust for Public Land,” said Marion Cook, Eglin Air Force Base Community Planner. “Limiting future incompatible development under the eastern approach into the Eglin Range will support numerous test and training missions.”