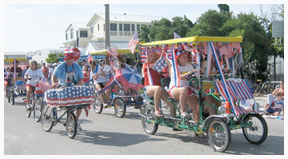 Seaside’s annual 4th of July Celebration brings together the best traditions along 30A and South Walton as The Merchants of Seaside host a fun-filled Fourth for all ages including two nights of fireworks, a community parade and live music for the entire family! Kick off the holiday with fireworks from the beach on July 3rd, then start your Independence Day at the annual South Walton 4th of July Parade; dance the night away with music during Stars & Stripes at Seaside; and salute the night sky with a spectacular fireworks display on the beach to end the evening.

The festivities begin on Sunday, July 3rd with a special pre-4th fireworks display from the beach behind Bud & Alley’s at 9 p.m. Bring your friends and family down to the water’s edge and view this stunning fireworks show amidst the backdrop of Seaside. 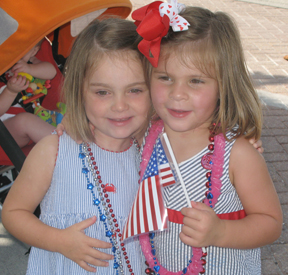 Join Seaside on Independence Day as we continue a long-standing tradition along 30A on Sunday, July 4th with the Annual South Walton 4th of July Parade. The 4th of July parade will begin at 8 a.m. at Seagrove Plaza and will end in the Seaside Amphitheater. Residents and visitors share in the glory as participants march down Scenic Highway 30A dressed in patriotic costumes and on festive holiday floats, all vying for your applause. Upon arrival in Seaside, a panel of judges will select winning parade entries and awards will be handed out. Don’t forget your beloved furry friends; the crowd always loves patriotic pooches dressed in their finest holiday costumes.

Families on bikes, scooters, golf carts and floats are invited to participate. Parade participants should meet at Seagrove Plaza (next to Garrett Realty) no later than 7:15 a.m. with decorated entries. Registration for parade participants is required; please visit: www.seasidefl.com/july4thparaderegistration to download a registration form. Prizes will be awarded to the best parade entries in a variety of categories. After the parade has ended and winners have been announced, enjoy music in the Amphitheater from 30A Radio until 11:00 AM, along with face painting and other fun.

The celebration continues with Stars & Stripes at Seaside at 7 p.m. featuring Will Hoge with special guest Jon Black. Will Hoge epitomizes an ideal for musicians: free-spirited and individualistic, knowledgeable of the past, but not obsessed with it, and imminently capable of bringing renewed creative energy and passion to an idiom that sometimes seems devoid of inventiveness and edge. Through sharp lyricisms and strong melodies, his songs tell stories that are delivered with a passion and desperation that demand attention. Hoge’s music is the unwavering sound of a born rocker. He filters rock, soul, folk, blues and country through a prism of emotional authenticity and what emerges is undeniable. Will headlines most of his tour dates, but has also played supporting slots for the Black Crowes, My Morning Jacket, The Avett Brothers, North Mississippi All Stars and Drive-By Truckers, as well as appearances at Bonnaroo and Austin City Limits. Those who have caught his live show already know what a huge, emotional kick a Will Hoge song can be. Those who will experience him for the first time this July 4th in Seaside are in for a fist-pumping, hip-shaking, chorus-shouting treat.

For the past six years, Birmingham artist Jon Black has been flying under the radar crafting his songwriting and traveling the country. His style has been described as Jackson Browne and Neil Young mixed with rich, thick atmospheres and musical landscapes. With lyrics that cut straight to the heart and hope flying from the speakers into the listener’s ear, you’re bound to love Jon and what he’s doing: Honest songs about desire, love, and hope. Black’s recent accolades include American Songwriter’s “Writer of the Week,” a performance at The Hangout Music Festival and a new digital distribution deal with Dualtone Records in Nashville.

And get ready for the giant finale with the Seaside Fireworks Spectacular at 9 p.m. This fireworks extravaganza will illuminate the skies in celebration of our country’s birthday. They are best viewed from the beach in front of the Seaside Pavilion and will be choreographed to a soundtrack that can be heard from our partner, 30A Radio. To hear the soundtrack, tune your radio to 107.1 FM.