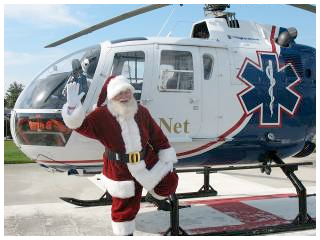 Children invited to dress up and follow Santa in a parade

There’s only one place on the Gulf Coast where Santa will literally fly in on a helicopter. Silver Sands Factory Stores has partnered with Sacred Heart Hospital on the Emerald Coast for Santa’s Arrival to the Center via the AIRHeart helicopter. On Saturday, December 4, the local community is invited for Silver Sands Santa’s Arrival celebration at noon.

All eyes will be on the sky as Santa waves from his helicopter and lands in front of everyone’s eyes in the east parking lot of the Center, near Nautica. After Santa’s safe landing, everyone will be invited to greet him and get a closer look at his chopper. Santa will then take a ride in a bright red Mustang convertible to the Center’s 42 foot tree in front of Saks Fifth Avenue OFF 5TH.

All children are invited to dress in holiday costumes and follow Santa in a festive parade to the Courtyard, led by a grand South Walton Fire Department truck. Following the parade will be refreshments, complimentary photos with Santa and a holiday costume contest for a Silver Sands gift card. Silver Sands will also make a donation to the winners’ choice of charity.  This is an annual event that benefits Sacred Heart Hospital.

Several other holiday events will continue throughout December, including charity gift wrap to benefit Sinfonia Gulf Coast, Angel Tree benefiting the Families First Network and a Silver Sands holiday promotion with 20 percent off one item at select stores. For more information, visit silversandsoutlet.com or call 850.654.9771.