When a family accidentally struck a young Broadwing Hawk on CR6 near Freeport on July 17, they immediately rushed the injured bird to Lisa Miller at the Wildlife Rehabilitators Partnership of Northwest Florida in Niceville.  Miller x-rayed the Hawk and found it had a fracture in a bone that corresponds to the forearm in humans.

Miller, worked with Joe Wyatt, Hammock Bay’s resident naturalist to rehabilitate the bird until it was ready for release.

“It left its travel cage easily and immediately flew off strongly into the local woodland,”  Wyatt commented. 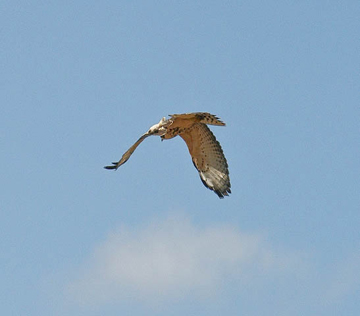