The Queen of Trees documentary and public forum Mar. 24 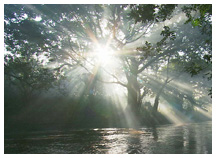 Enjoy an award winning documentary and learn about keystone species

‘The Queen of Trees’ will be the featured documentary at the public forum sponsored by the South Walton Community Council on Wednesday, March 24, 2010.  The forum is from 7 to 8:30 p.m. at the Seaside Repertory Theater located on the circle in Seaside.   ’The Queen of Trees’ explores the intimate relationship between a giant fig tree and a tiny fig wasp and the multitude of other species that are supported by this complex web of life. The film, two years in the making, has won numerous awards including a Peabody, the Grand Prize and the Public Choice Award at Telluride and the top prize for Best Documentary on Science or the Natural World at the Grierson British Documentary Awards.   Following the 60 minute film will be a short discussion about the film and its relevance to our own keystone species, the scrub and longleaf communities.   The presentation is free. Everyone is invited to attend.
This program is one of the monthly series of forums presented by SWCC to educate and entertain the community.