Over 1.8 million Monarch butterflies have been tagged and tracked over the past 27 years. This October these iconic beauties will flutter through the Florida Panhandle on their way to the Oyamel fir forests on 12 mountaintops in central Mexico. Monarch Watch volunteers and citizen scientists will be waiting to record, tag and release the butterflies in hopes of learning more about their migration and what the 2019 population count will be.

This spring, scientists from World Wildlife Fund Mexico estimated the population size of the overwintering Monarchs to be 6.05 hectacres of trees covered in orange. As the weather warmed, the butterflies headed north towards Canada (about three weeks early). It’s an impressive 2,000 mile adventure for an animal weighing less than 1 gram. Those butterflies west of the Rocky Mountains headed up California; while the eastern insects traveled over the “corn belt” and into New England. When August brought cooler days, all the Monarchs headed back south. 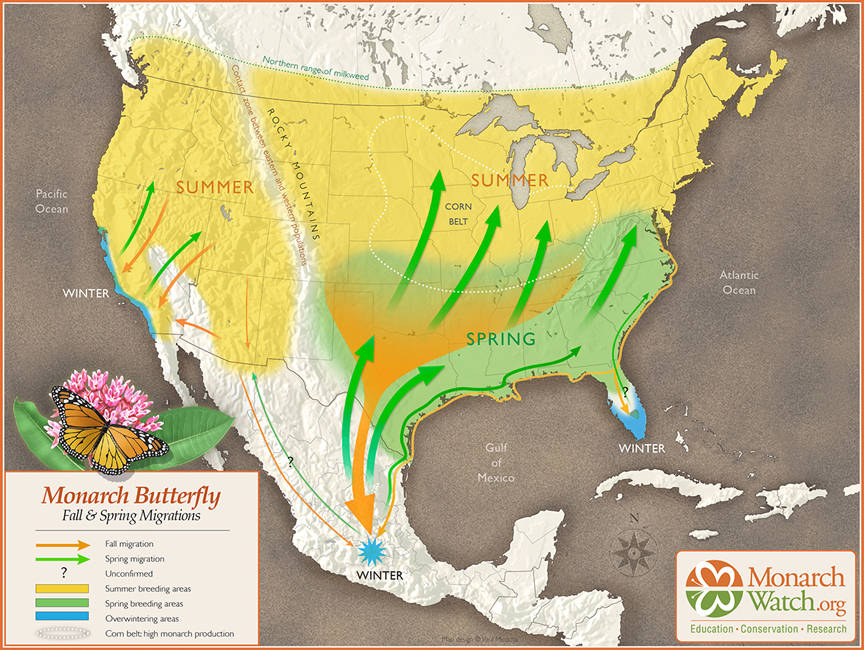 What the 2018 Monarch Watch data revealed was alarming. The returning eastern Monarch butterfly population had increased by 144 percent, the highest count since 2006. But, the count still represented a decline of 90% from historic levels of the 1990’s. Additionally, the western population plummeted to a record low of 30,000, down from 1.2 million two decades ago. With estimated populations around 42 million, the U.S. Fish and Wildlife Service began the process of deciding whether to list the Monarch butterfly as endangered or threatened in 2014. With the additional information, FWS set a deadline of June 2019 to decide whether to pursue the listing.

Scientists estimate that 6 hectacres is the threshold to be out of the immediate danger of migratory collapse. To put things in scale: A single winter storm in January 2002 killed an estimated 500 million Monarchs in their Mexico home. However, with recent changes on the status of the Endangered Species Act, the U.S. Fish and Wildlife Service has delayed its decision until December 2020. One more year of data may be helpful to monarch conservation efforts.

Individuals can help with the monitoring and restoring the Monarch butterflies habitat. There are two scheduled tagging events in Panhandle, possibly more. St. Mark’s National Wildlife Refuge is holding their Butterfly Festival on Saturday, October 26 from 10a.m. to 4 p.m. Henderson Beach State Park in Destin will have 200 butterflies to tag and release on Saturday, November from 9 – 11 a.m. You can learn more by going to monarchwatch.org.

There is something more you can do to increase the success of the butterflies along their migratory path – plant more Milkweed (Asclepias spp.). It’s the only plant the Monarch caterpillar will eat. When they leave their hibernation in Mexico around February or March, the adults must find Milkweed all along the path to Canada in order to lay their eggs. Butterflies only live two to six weeks. They must mate and lay eggs along the way in order for the population to continue its flight. Each generation must have Milkweed about every 700 miles. Check with the local nurseries for plants.  Though orange is the most common native species, Milkweed comes in many colors and leaf shapes.

Burn ban issued for Walton County
Why are the water levels so high in the Choctawhatchee Bay?