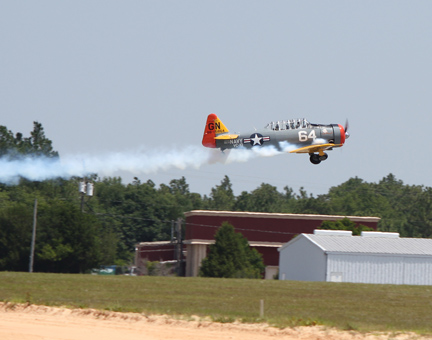 The City of DeFuniak Springs is hosting its fourth annual fly-in/aviation festival, “Marvel of Flight” on Saturday, April 26, 2014, 8 a.m.- 4: p.m. at the DeFuniak Springs Municipal Airport on Hwy 90 West.

Come experience history at the DeFuniak Springs Airport as the legacy of the B-25 is celebrated. Get up close and personal with “Panchito,” one of only a dozen or so airworthy B-25’s in existence today. The Panchito has a wingspan of 67 feet 6.7 inches and length of 53 feet 5.75 inches, and will be on display.

In addition, the Red Dragons Eastern Block Warbirds will be also on display. Even a novice to airplanes, on can recognize that this is a tough rugged aircraft. The Yak 52 was originally used for aerobatic training off of unimproved airstrips and was first delivered to the Russian military in late 1978. The Chinese Nanchang CJ6 aircraft are not quite as aerobatic as the Yak, but are larger and faster. The first CJ6 was delivered to the Chinese military in the mid-1960s. Both aircraft served as excellent trainers for military pilots transitioning into jets or learning advanced aerobatic maneuvers. Red Dragon Pilots are Fast rated Pilots of The Red Star Pilots Association, a Federal Non Profit 501(c)(3) organization dedicated to the preservation and operation of such radial engine aircraft as the Nanchang CJ-6 and Yak 52.

The admission fee is one food drive donation item to benefit the Matrix Community Outreach Center.