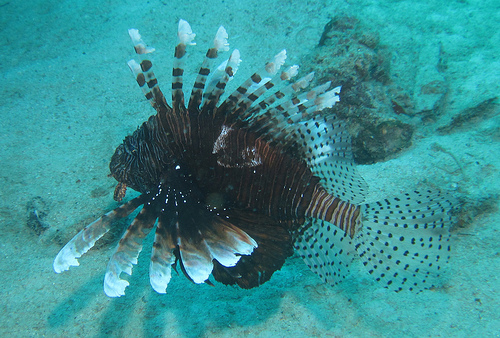 At its April 13 meeting in Jupiter, the Florida Fish and Wildlife Conservation Commission (FWC) approved a two-part lionfish plan to further encourage removals of the invasive species in 2016.

Lionfish have a potential negative impact on native wildlife and habitat and the FWC encourages divers and anglers to remove them from Florida waters whenever they can.

The two-part initiative will include a statewide reward program that will expand upon 2015 efforts and a Panhandle Pilot Program.

“Innovative programs like these are a great way to generate public involvement and interest in controlling the lionfish population,” said FWC Chairman Brian Yablonski. “Those that remove lionfish not only get rewarded for their efforts, but they also get the experience of helping manage Florida’s fisheries. In addition, involving Florida’s residents and visitors helps us gather better data to continuously evaluate and improve our approach to invasive species control.”

To qualify in the statewide program, participants must remove 50 or more lionfish between Lionfish Removal and Awareness Day (May 14, 2016) and the end of September. Qualified participants will receive a commemorative coin to mark their membership and an event T-shirt; be featured in the FWC Lionfish Hall of Fame on the MyFWC.com website; be entered in drawings to win prizes including fishing licenses, lionfish harvesting equipment, fuel cards and dive tank refills; and, if qualified before the relevant fishing seasons start, they will have the opportunity to take an additional spiny lobster per day during the 2016 mini-season (July 27-28). FWC will also consider allowing the opportunity to harvest an additional bag limit per day of bay scallops during Labor Day weekend (Sept. 3-5, 2016), where population can support harvest.

Qualifying lionfish must be counted via an FWC approved process such as a sponsored tournament or a check-in location. These locations will be listed online at MyFWC.com/Lionfish. All other fishing regulations still apply.

The person who “checks in” the most lionfish between the Lionfish Removal and Awareness Day kick-off and the end of September will be crowned Florida’s Lionfish King or Queen and will receive a lifetime saltwater fishing license, have his or her photograph featured on the cover of the FWC’s January 2017 saltwater regulations publication, be featured on MyFWC.com’s Lionfish Hall of Fame, and be recognized at the November 2016 Commission meeting.

The Panhandle Pilot Program will focus on lionfish removal efforts off Escambia, Santa Rosa, Okaloosa, Walton, Bay, Gulf and Franklin counties, where lionfish can be found in high densities. For every 100 lionfish harvested from this seven-county region between May 2016 and May 2017, the harvester will be eligible to receive a tag allowing them to take either a legal-sized red grouper or a legal-sized cobia that is over the bag limit from state waters. The state will issue 100 red grouper and 30 cobia tags in total to successful participants in the pilot program. In addition, any person or group that harvests 500 or more lionfish during this one-year period will be given the opportunity to name an artificial reef.

Learn more about lionfish, including the two-day FWC hosted Lionfish Removal and Awareness Day Festival (May 14-15) in Pensacola at MyFWC.com/Lionfish or ReefRangers.com.