Leukemia Cup Regatta events kick off in Panama City May 2 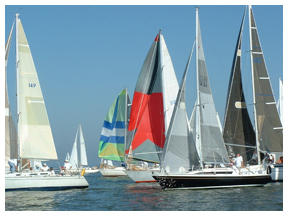 Enjoy a week of festivities for a good cause

The inaugural Leukemia Cup Regatta at Bay Point, making its debut in Panama City. Not just an thrilling sailing race, this moving event is intended to raise money to fight blood cancers and will be held at Bay Point Marina May 7th-9th.

Never heard about the Leukemia Cup before? You may be surprised to learn that numerous Leukemia Cup Regattas are held around the country, each with one goal: to raise money to fight leukemia, lymphoma and myeloma. In 2008, the sailing community raised more than $3.6 million at 38 Regattas, bringing the overall campaign funds raised to more than $27 million. In 2009 Bay Point Marina will join forces with the St. Andrews Bay Yacht Club and Bay Point Yacht Club to bring the Leukemia Cup to the Panama City area for the first time. We’ll feature three days of food, live music, dock walks, golf tournaments, tennis tournaments, silent auctions, art shows, wine tastings and, of course, sailing.

The First Annual Leukemia Cup Poker Run May 2nd at Pirates Cove Marina. The Leukemia Cup Poker Run involves power boaters of all speeds, as boats travel to different stops along the route to pick up playing cards. At the end of the Run, attendees will return to Dockhopper’s Restaurant at Pirates Cove Marina for a Poker Run Party where hands are compared and the fun begins! Additional poker hands are available for purchase to increase your odds. “Green” entrants will be available for players that either don’t own a boat or would like to participate without creating a carbon footprint.

On May 7th, the Bay Point Marriott Golf Resort will host a charity golf tournament on their Nicklaus Course. Featuring a Stableford format, this event is open to the public and tickets are available. Immediately following the golf tournament will be the Official Leukemia Cup Regatta Kick-Off Party at Dockhopper’s, located on the water at Pirate’s Cove Marina.

The main event will take place at Bay Point Marina on May 8th and 9th. On Friday, May 8th, the public is invited to Bay Point Marina to begin the Leukemia Cup Regatta with a dock walk, wine tasting, art show, live music, food, silent auction and children’s activities. Saturday, May 9th will continue the celebration and will also include a boat parade as participants depart for the Regatta. The course will take boats outside St Andrews Bay (weather permitting) and will be visible from many locations along the beaches of Panama City Beach.

This event is co-hosted by the St Andrews Bay Yacht Club and the Bay Point Yacht Club. http://www.baypointmarina.net/lcr2.cfm