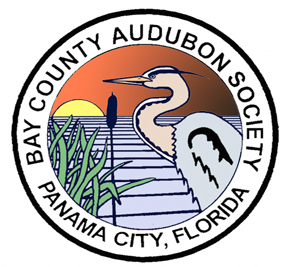 January 17 – 19, 2014 – 3-day trip to Cedar Key, Fla., about a 5- hour drive from Bay County. Go birding along the extensive flats in the area and enjoying the local food and sights. This is the closest place where one can see Florida Scrub Jays. Reservations are required. Call Ron if you are interested but haven’t already signed up at (850) 763-7485.

Saturday, Feb. 15 – Birding in St. Andrews State Park. Field trip coincides with the Great Backyard Bird Count. Some trail walking is required, but nothing too strenuous. Bring binoculars, snack and drinks. Meet behind the Taco Bell Restaurant at the intersection of Thomas Drive and U.S. Hwy 98. (About 1/2 mile west of the Hathaway Bridge) Be there by 7:40 a.m.

Thursday January 16, 2014 – ‘Italian Lakes Adventure’ by Stan Walsh
So magical is the scenery of Italy’s Lake District that Leonardo da Vinci chose it for the background of the Mona Lisa. English poet Shelley, in 1818, describes Lake Como as “a long, narrow lake that seems like an immense river flowing between the mountains and the forest. “The lakes are long crevices that glaciers carved into the Alps. Fed by melting snows, the lakes lead to historic Alpine passes—Brenner, St Goddard. We visit Lake Como, Maggiore, and Garda. To the south we visit Cremona on the Lombard plain, home of the most famous violin in the world, the Stradivarius. Today it continues to be the center of production of stringed instruments. We were fortunate to meet a young violinmaker who discussed and demonstrates his art.

Thursday, January 23, 2014 – ‘The Gift of the White Moose and Florida’s Alien Wildlife’ by Tom Sterling
The stars of “In Search of the Albino” were four white moose, this is their own story. For five years I sought these elusive animals around a lake in northern Ontario. The viewer will enjoy intimate moments with a mink, black bears, cliff swallows, caddis flies, loons. Common mergansers, normal brown moose and, of course, the four white moose—three of which I‘ve captured in a single scene. Having completed a television special titled “Animal Aliens”, I knew that Florida, among the 50 states, was ranked number one for introduced species of plant and animal. Florida’s Alien Wildlife covers some of the more high profile exotic species such as Sambar deer, Rhesus and Vervet monkeys, Amazon parrots, iguanas, Purple Swamp Hens, Melaleuca and Casuarina trees, Water Hyacinth, Nutria, walking catfish, Sacred Ibis, mynahs, feral pigs, and many others.

Thursday, January 30, 2014 – ‘Eastern Canada Adventure’ by John Holod
The Canadian Maritimes are a region of eastern Canada consisting of three provinces—New Brunswick, Nova Scotia, and Prince Edward Island. The film includes the Gaspe Peninsula and Newfoundland/Labrador for a spectacular adventure that should be on every travelers “to do” list. The film includes Tadoussac-whale watching –St Lawrence River-lighthouse history-Forillon National Park-Bonaventure Island, and Perce Rock.

Thursday, February 13, 2014 – ‘Pacific Coast, Top to Bottom’ by Bob Deloss
From the Mexican border just a few miles south of San Diego California to the Canadian border north of Seattle, Washington, lies some of the world’s most impressive coastlines, forests, and mountains with rivers untamed and wild.

Cities of magnificent stature that have attracted millions of people to its doors are part of the film tour. Travel with Bob DeLoss down the coastline as his camera captures the scenic beauty and fascinating locations as he journeys on the Pacific Coast highway.