Hogfish caught along reef in Gulf 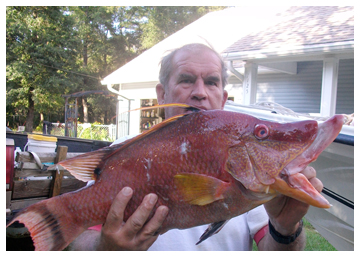 Local fisherman spears fish not commonly found in our area

Local fisherman James Griffith speared this hogfish (Lachnolaimus maximus) Sept. 5 in the Gulf of Mexico near Sandestin. Diving in about 100 ft. of water James found the hogfish along a natural reef.

“I’m guessing it weighed about 6 or 7 pounds. Looking at it on the cooler lid, it measures 23.” This is the first I have landed, but I saw another one on the same reef about a week later. Maybe they are moving into our area. We have some warm, clear water in the area now, the diving has been really nice,” James said.

Geographical Distribution
In the western Atlantic Ocean, the hogfish occurs from Bermuda and North Carolina, south through the Caribbean Sea and northern Gulf of Mexico, continuing to the north coast of South America. It is very common off Florida and the islands of the Caribbean in shallow waters. Juveniles are often found in seagrass beds in Florida Bay.

Habitat
This fish is commonly found over open bottoms and coral reefs at depths ranging from 10-100 feet (3-30m). The hogfish is often encountered in areas where gorgonians are abundant. The hogfish is widely distributed along the edges of the reef, forming small groups. It prefers locations with hard sand and rock bottoms near shallow patch reefs just inshore and offshore from the main reef structure. Larger individuals occur in the main reef area while smaller fish reside among the patch reefs.

Conservation
Although commercial catch rates have decreased over the past seven years off the eastern coast of Florida while remaining stable in the Gulf of Mexico, there is no formal stock assessment for the hogfish. Recreational catches have also fluctuated but without any apparent trends. However, fishing pressure has reduced populations of hogfish in some areas to low levels. There have been successful attempts at raising hogfish in captivity and it is hoped that aquaculture will eventually reduce the fishing industry’s pressure on natural stocks of this fish.