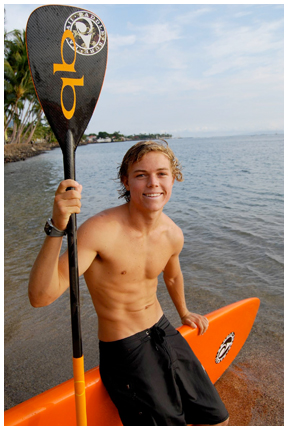 Originally from the Northwest Florida Gulf Coast, Slater currently resides in Maui and is a celebrated up-and-coming waterman who can be seen on national competition circuits.  Recent accolades include winning the Gulf Coast Stand Up Paddleboard Championship in May 2010, winner of the  Sunset Beach Trials event at the first contest of the Stand Up World Tour Sunset Beach, Hawaii, 2010 and earning several titles at the famed Duke’s Ocean Fest.

Named as the ‘2nd Fastest Stand Up Paddler in the World’ at the 2009 Rainbow Sandal’s Gerry Lopez Battle of the Paddle Race, Trout will race on the SoWal Lifeguard YOLO team in the Elite Division of the YOLO Board Stand Up Paddle Series (www.yolorace.com).