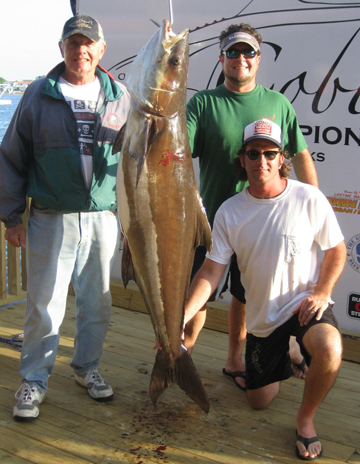 Cobia fishing’s premier tournament, the Cobia World Championships, is adding a new twist for 2013. The tournament, which has taken place at Destin’s Harbor Docks Restaurant for over 20 years, has partnered with Bote Boards, to introduce a Stand-Up Paddle Board Division. The angler who lands the largest cobia on a paddle board during the tournament will be awarded a new BOTE Board donated by the Destin store.

“Fishing on SUPs is rapidly increasing in our area, and across the nation,” says Eddie Morgan, tournament director, “since cobia migrate just off the beach in our waters, they are a perfect species to target on a paddle board. Catching a large one on a board will be quite the challenge, but people are catching sailfish on them, so why not cobia?”

“Most of the best cobia fishermen in the world fish are out of either Destin or Pensacola,” Morgan said, “adding a scale at Outcast allows more of those fishermen to compete against each other for the right to be the World Champion.

Harbor Docks Restaurant will also serve host to the Crab Cruncher Classic cobia tournament. The weekend tournament will take place at Harbor Docks from Thursday, April 11, 2013 through Sunday, April 14, 2013, with top cobia fishing teams converging on the Destin Harbor to compete for a total purse well over $200,000.

“Our goal is to treat 500 underprivileged children to a memorable day of fishing aboard some of Destin’s finest charter boats. People don’t realize that many local children have never even seen the gulf,” Morgan added, “We just want to take them fishing.”

If you’d like more information about the Cobia World Championships visit www.cobiaworldchampionships.com or call Eddie Morgan at (850) 837-2506 or email Eddie at eddiem84@gmail.com.