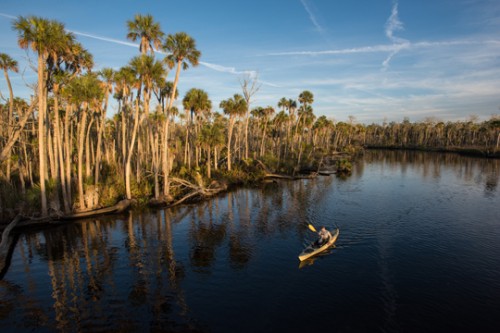 As Florida’s human population has expanded, conservation lands have become increasingly isolated from one another, causing problems for numerous species of wildlife. The Florida Wildlife Corridor Expedition shows that a statewide wildlife corridor is still possible and important for the future of people and wildlife.

The Florida Wildlife Corridor Expedition team includes executive director Mallory Lykes Dimmitt, conservation photographer and project founder Carlton Ward Jr. and biologist Joe Guthrie whose Central Florida black bear research was the inspiration for the campaign. Beginning January 10, 2015, the team embarked on 925-mile trek to highlight a wildlife corridor from Central Florida to the Gulf Coast, through the Big Bend, and across the Panhandle all the way to Alabama.

The original Florida Wildlife Corridor Expedition was a 1000-mile trek through peninsular Florida, from the Everglades on South Florida to the Okefenokee Swamp in southern Georgia.