Editors note: This story was originally written in February 2009. With the recent passing of Gene Wesley on Jan. 13, 2011, we are sharing the story with our readers once again. Rest in peace Gene Wesley, you were a lover of the outdoors and a true original.

Locals in Walton County have enjoyed fishing from Grayton Beach for generations. With a panoramic view of the Gulf, gentle breezes, it doesn’t get any better.

Van Ness Butler, Jr. grew up in the area and has fond memories of the early days fishing on Grayton Beach.

Butler remembers locals, Herbert and Olin Miller as one of the first to launch a boat from Grayton Beach in the 1940s. A New England style dory, with a Model A engine, was rolled over logs across the sand to get to the Gulf of Mexico.

“Western Lake rarely opened to the Gulf even back then. It was hard work getting that dory in and out of the water,” Butler recalls.

With no waterway access to the Gulf for several miles, rolling the dory across the sand was the only option.

At the young age of 12, Butler worked for the Miller’s catching mullet that was salt barreled and traded up in Vernon for syrup and corn meal. They would also catch a lot of snapper in the Gulf back then as well, and Butler’s was paid his wages in fish.

Butler’s first boat was a 16 ft. juniper, with a 4 HP outboard motor. The boat was rolled out to the water, and along with his father Van Ness, Sr., and sister Janice, they would often come back with the bottom of the boat filled with grouper.

Shortly after WW11, locals started buying Army surplus four-wheel drive Jeeps. Getting your boat into the Gulf suddenly became much easier, and soon there were bigger and better boats launching from the beach.

Butler remembers his good friend Gene Wesley as one of the first to acquire one of the Jeeps, and soon the two were out trolling for Spanish mackerel, snapper and bluefish on Wesley’s 15 ft. runabout christened ‘The Good Ship Lollipop.’

Butler remembers one day in particular, the two were out fishing one of their favorite spots. Something dark appeared in the water, and they quickly ascertained it was a shark circling the tiny boat. They heard a grinding noise and realized the shark had grabbed hold of the propeller.

“I think we need to fish somewhere else,” Butler exclaimed.

Butler’s long-time friend, Gene Wesley has fond memories of the early days in Grayton Beach as well, and remembers having the beaches all to themselves.

Back in the 1950s Wesley worked as a deck hand for Preston “Speck” Jones, a Point Washington fishing guide, and in 1959, he became one of the original members of the Destin Charter Boat Association. His 36 ft. juniper boat “The Rebel,” was one of the first charters in Destin.

Wesley remembers fishing in what they called the snapper banks. “Back then we would find our fishing spots by triangulating with the houses and trees on shore,” Wesley recalled. “It was what we called our 20/20 Fathometer,” he quipped.

Wesley mentioned that the anglers had unique names for locations along the coastline in South Walton; Seagrove was Russ Hammock; Blue Mountain, Yellow Bluff; and the Coffeen area the Old Woman’s Hill.

Wesley recalled one day he and Butler wished they had chosen a different place to anchor off.

It was in the mid 1950s and a day before an Air Force ammunition demonstration at Eglin. The jets were doing what Wesley called toss bombing practice in the Gulf right over their heads.

“The planes were circling and one went straight up with red and green smoke coming out the back of it. The plane dropped one bomb and it exploded in mid air. Then the second bomb dropped was so close we could hear the shock ring,” Wesley explained.

The two found out later that the Air Force Base didn’t want the pilots to return with the live ammunition on board their aircraft. Wesley was confident the pilots must not of seen the two of them in the water.

Gene Wesley, 80, still maintains a crabbing business in South Walton. His two sons, Sam and Jody, carry on the family tradition of fishing from Grayton Beach today. His eldest son David is a Brigadier General in the United States Air Force.

“The surf fishing is still great,” Butler said with a smile.

Lori Ceier is the Publisher of Walton Outdoors, an online publication about outdoor life in Walton County. She can be reached at 850-267-2064 or by email at: lori@waltonoutdoors.com 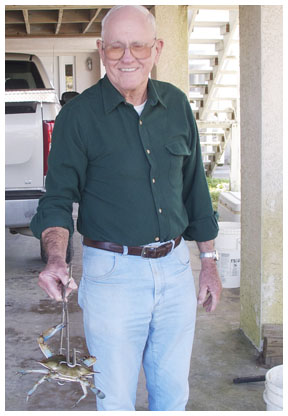