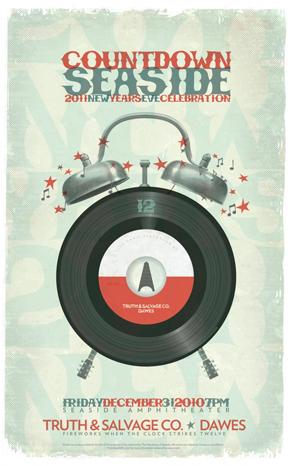 Seaside is the destination to ring in 2011 with the entertainment along the Gulf Coast. The Merchants of Seaside invite everyone out for Countdown Seaside! A New Year’s Eve Celebration, a family-friendly party featuring live entertainment, kid’s art projects, street performers and a fireworks display over the Gulf of Mexico. Festivities for this event begin at 7 p.m. and last until 12 a.m. New Year’s Day.

Spectators will be entertained with a mix of music ranging from fresh Americana rock ‘n roll to folk and soul. The celebration kicks off in the Amphitheater with a performance by Dawes at 7 p.m., followed by Truth & Salvage Co. at 9:30 p.m.; with fireworks at midnight.

Abrakadoodle will be on hand from 7 -11 p.m. offering unique art projects for the celebration. These projects will be free and include making celebratory party hats, snow globes and a time capsule where families will be able to place New Year’s wishes and resolutions! Abrakadoodle will also have face painters on hand to get both the young and young-at-heart in the festive spirit.

Dawes’ blend of classic 1970s folk-rock and contemporary flair made the band’s album North Hills an instant hit. Named after the group’s hometown, the record draws instant comparisons to the alt-country sounds of Buffalo Springfield. The opening song, “Western Skyline,” was named one of the best songs of 2009 by Rolling Stone magazine.

Prior to the conception of Truth & Salvage Co., the members have all performed and collaborated with many other well-known and talented acts such as Jack Johnson, Ben Folds Five, and The Squirrel Nut Zippers; as well as members of My Morning Jacket and Rogue Wave.

Don’t miss our final celebration of the year and the start of 2011. Events are made possible by the arts and entertainment fee collected by The Merchants of Seaside. For additional event details visit seasidefl.com.