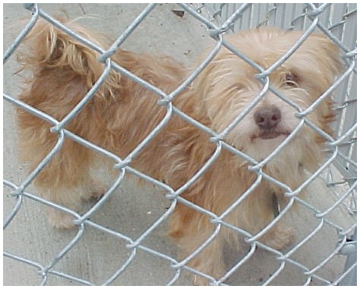 Scooter a special pup with a miraculous story

This irresistible face belongs to Scooter, a very special resident of Alaqua Animal Refuge.  A terrier mix with a soft tan coat, Scooter is about five years old, and has a story that borders on the miraculous.  When he first arrived at the shelter, he had been mercilessly abused.  Besides suffering from bruised ribs where he had been repeatedly kicked, another brutal injury caused him the loss of his right eye. After lots of tender loving care by our awesome staff, Scooter was adopted out to a potentially good home.

It was soon discovered however, that after leaving the refuge he was passed along to a another individual who, sadly, neglected him.  The good news is that Scooter escaped further mistreatment by running away. The bad news is that through a series of bizarre events, he ended up at another shelter, just one day away from being euthanized.

Rescued at the last minute by a human guardian angel, Scooter was returned to the safety and security of Alaqua Animal Refuge.  Still sweet, trusting and eager to please in spite of all the bad times he’s been through, this determined little canine has resolved that in 2010 he will continue to be the very best dog he can be.  He hopes that the special someone out there who’s waiting for a dog just like him, will hear his story and come to take him to the forever home he longs for.
Alaqua Animal Refuge is a no-kill animal refuge, located on a 10 acre farm housing more than 300 animals daily, ranging from dog, cats, horses, goats and birds. Alaqua Animal Refuge relies on the kindness and generosity of its supporters.

If you would like to adopt Scooter or any of the other available friends, contact Alaqua Animal Refuge at 850-880-6399 or go online at www.aarflorida.com.

Click here to buy the best holistic pet food on the planet and help Alaqua Animal Refuge at the same time. A portion of the proceeds go to Alaqua.