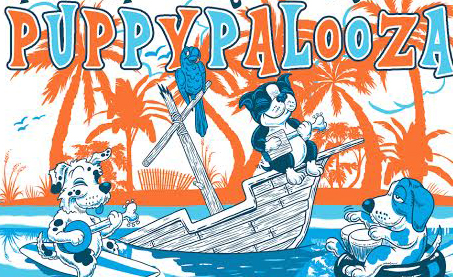 The inaugural Puppypalooza to benefit the Unconditional Love Program of Alaqua Animal Refuge will be held at Aaron Bessant Park in Panama City Beach on September 20, 2014 from 1 – 9 p.m.

Since 2011, the Unconditional Love Program has provided inmates in local jails and prisons the skills needed to train and provide care to Alaqua’s canines. Two of our three prisons are located in Bay County, and the majority of the dogs from the program are pulled from Bay County Animal Control. Alaqua chooses dogs that may otherwise have a hard time getting adopted.

This program adds value to the inmates’ institutional lives and provides job skills as they prepare for re-entry into their communities. The inmates learn empathy, patience and respect while teaching the dogs basic skills and potty train them. After graduating, canines are either adopted as family pets or continue on into a second phase and become therapy dogs that we give away free of change to individuals or families who could benefit from one.

Alaqua Animal Refuge is a no-kill animal refuge located in Northwest Florida. The refuge has placed over 10,000 animals of all kinds since it’s inception in 2007, and has grown to become a recognized leader in animal welfare and animal cruelty prevention. The refuge is located about 20 minutes north of the Emerald Coast’s sugary white beaches, which each year draw millions of visitors from around Florida and surrounding states.