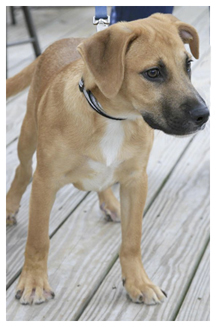 My name is Crash and I’m ready to rock!

Injured pup makes speedy recovery thanks to some great folks!

Crash, the Black Mouth Cur puppy brought to Alaqua Animal Refuge in late February after apparantly being dragged behind a vehicle, was released from medical quarantine Apr. 6,  and is now ready for adoption. Dozens of citizens sent donations in to care for Crash’s expensive medical care and the cards and letters poured in. There was enough money raised to pay for all of his care and remaining funds will go towards other abused animals brought into the refuge.

Four month old Crash arrived at Alaqua Animal Refuge when he was only about 8 weeks old and has spent the critical socialization period of his life living in a medical facility having his wounds tended to each day by our caring veterinary staff. Crash should have been experiencing life and becoming socialized to a wide variety of humans, objects, animals, situations and environments.

Niki Tudge, Co-Founder of Alaqua explained that “Crash will now need to be enrolled into a good puppy class that offers not only basic puppy obedience but also controlled off-leash puppy play so he can catch up on his puppy education.”

The DogSmith has offered to sponsor this education for Crash. Crash’s new owners will be invited to enroll Crash and themselves into a 6 week DogSmith Puppy Class and then an 8 Week DogSmith Obedience class free of charge.

Let’s get Crash truly back on his feet and fully socialized so he can live out a normal and healthy dog life.

For more information about Niki Tudge and her great efforts in behave canines, you can email her at: NTudge@888dogsmith.com or www.888DogSmith.com
Tel: 1-888-Dog-Smith (364-7648)
http://www.DogSmithTrainingCenter.com

If you would like to adopt Crash or any of the other available soulmates, contact Alaqua Animal Refuge at 850-880-6399 or go online at www.AlaquaAnimalRefuge.com