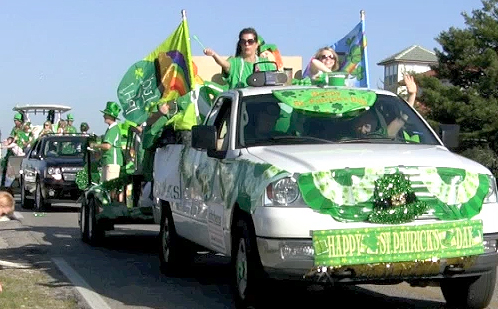 The 30A St. Patrick’s Day Parade began small in 2008, and has now grown to include a festival complete with green beer, Guinness sponsored banners, rocking entertainment and an Irish good time.

The Grand Marshal of the parade will be Jac McTighe, who follows previous Grand Marshals Rick Talbert, Fire Chief, Commissioner Cecila Jones, Sheriff Michael Adkinson and Deputy Fire Chief Sean Hughes. The parade will form on Scenic Hwy. 30A near The Preserve, then head westbound ending at Gulf Place.

Businesses are encouraged to enter well decorated cars trucks or floats to vie over the coveted Best In Parade award. The parade judges table is appropriately situated at in Blue Mountain Beach at the halfway point. The Best in Parade award ceremony will take place at Gulf Place.

After the parade, there will be food, drinks, and product vendors, face painting, and entertainment from 4 p.m. onward at Gulf Place with Irish dancers, and Celtic band Mickle-A-Do from Atlanta. Five lucky people will also find a pot of gold, as there will be 3 gold Celtic necklaces tossed to onlookers during the parade and 2 more at Gulf Place during the entertainment. One leprechaun will be slipping around the jigging feet. If he’s caught, you just might find that pot o’ gold at the end of the rainbow.

Ft. Walton Beach’s own Drake Irish Dancers will kick it up a notch and perform to their own brand of old country sounds, later to be joined by Mickle-A-Do for a jigging good time where merriment will bring the level up once more.

Follow the beaten trail to where Miss Lucille’s Gossip Parlor transforms ordinary beer into the magical green variety of suds that can only be appreciated by jocular Irish lovers around the globe. Large Guinness banners are available for sponsor spots, which will be displayed at Gulf Place, contact for price and availability.

Vendor table spaces are available. Decorate your car, truck, golf cart, and enter the parade today at www.30aparade.com.  Bicycles are welcome on the bike path, as 30A will not be closed during the parade.