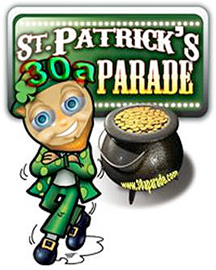 The 4th Annual 30A St Patrick’s Parade is slated for Sat. March 12 at 3 p.m.. Forming on Scenic 30A at near Gulf Trace, the parade heads westbound ending at Gulf Place in Santa Rosa Beach.

The grand marshal of the parade will be Rick Talbert, South Walton Fire District Chief.    Up for grabs again this year is the Best in Parade award, previously won by Stinkys Fishcamp and JC’s off the Hook. Businesses are encouraged to enter well decorated cars trucks or floats. If you wish to enter the parade, please visit www.30aparade.com

The judges table is appropriately situated at Johnny McTighes in Blue Mountain Beach at the halfway point. At Gulf Place after the parade will be face painting, Irish dancers, music and entertainment from 4-6 p.m. The Best in Parade award ceremony will also take place at Gulf Place.